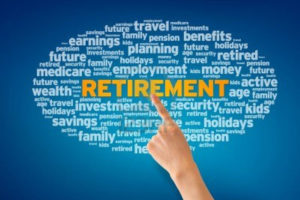 Many of our members may be looking toward retirement. To expedite your pension application process, you must notify our Local 570 office.

Please know that in order to receive your International, NEBF and Local pension in a timely manner, your pension paperwork should be requested from the Local 570 Office five months prior to your expected retirement date. Upon contacting the hall, the necessary pension forms will be mailed to you.

The IBEW Pension and Reciprocity Department reports and provides assistance to the International Officers on areas of department responsibility: pension and death claim payments, construction industry reciprocity, and membership records.

The IBEW has a long history of designing and providing benefits to help its members. In 1922, the IBEW created the Electrical Workers Benefit Association (EWBA) to ensure sufficient resources to provide a dignified interment when an IBEW member passed away. The delegates to the 1927 IBEW Convention authorized the creation of a pension fund, and in 1928, the Officers of the IBEW introduced the IBEW Pension Benefit Fund (PBF) to provide much-needed and previously unattainable pension benefits for all participating members.

These two plans functioned separately for many years, and to improve benefits, a decision was approved to combine the plans. At the 1991 Convention, the EWBA and PBF were amalgamated into one fund, and as a result, death and pension benefits were significantly improved. At that time, all EWBA beneficiary designations became null and void, and all death benefits after this time have been paid by the PBF. The most recent changes to the PBF death benefits were approved at the 2001 Convention and became effective January 1, 2002, thereby increasing the death benefit payment to $6,250 and providing for an accidental death benefit of $12,500. At the 37th IBEW Convention held in September 2006, the delegates approved an increase to PBF pension benefits providing a $4.50 credit per year of service. All members retiring January 1, 2007, or later will receive these improved payments.

The Pension and Reciprocity Department assists with and researches membership records to determine eligibility for pension and death benefits for International officers and various departments in the International Office. The officers and departments utilize these requests for organizing activities, taking political action, and mailing informational material. The department researches and corrects data not provided (or incorrect data) for members. This research involves reviewing per capita reports, obligation forms, beneficiary forms (including old EWBA records), and correspondence. If necessary, this also may entail contacting local unions directly for information to maintain accurate records

There have been many changes to the plan since it was first established. Your benefit is generally based on the rules of the NEBF at the time you begin receiving a benefit. Therefore, before making any decision that could affect your rights or responsibilities under the plan (such as a decision to retire), you should contact the NEBF office and ask how the plan applies to your specific situation.

NEBF plans or a pension application

All questions pertaining to this retirement plan should be forwarded to the NEBF.